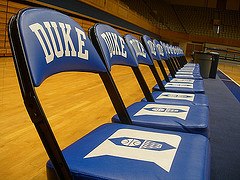 At Duke University, Durham NC, each year the students inhabit a tent city which they call “Krzyewskiville” after Duke’s men’s coach, Mike Krzyewski, on campus in anticipation of Duke’s participation in the NCAA men’s basketball tournament.  The university has strict requirements for the tent city, and the students who participate in it report that living in the tent city is a “vital part of their Duke education.”  Anthropology department member Orin Starn stated:

“By now, tenting has become a part of the Duke brand and undergraduate experience.  None of us on the faculty or in the Duke administration would dare to suggest that student time might be better invested elsewhere.”

At Duke, as at many other leading private and public universities with national sports profiles, faculty and administration are concerned about the non-intellectual rituals which accompany a team’s season with so many in the student body:  “…tailgating parties, heavy drinking, and other assorted shenanigans.”  Duke’s president, a former Yale professor and dean, recently said he found it both “foolish” and “disheartening” when high school students indicate the men’s basketball team as the main reason they are interested in Duke.

In light of the Penn State scandal, IESolutions is compelled to question whether high-profile athletic programs at leading colleges and universities could increasingly become the tail that wags the dog,  dictating institutional priorities, spending, and persona.